Sacred Heart Catholic Church was established in 1966 and was initially part of the San Antonio Archdiocese. Since 2000, it is within the Diocese of Laredo, itself founded on July 3, 2000 by Pope John Paul II and overseen by its first Bishop, James Anthony Tamayo. Bishop Tamayo had until that time been Auxiliary Bishop for the Archdiocese of Galveston-Houston.

Our Parish Priest is Father Lawrence Mariasoosai, OMI who has been with us since 2013. He came to us from Our Lady of Guadalupe Parish and Shrine in Midland, where he spent just one year before being reassigned to Sacred Heart to take over for Father Pablo Wilhelm who was transferred to Roma, Texas.

“Come to me, all you who labor and are burdened, and I will give you rest. Take my yoke upon you and learn from me, for I am meek and humble of heart; and you will find rest for yourselves. For my yoke is easy, and my burden light.”
—Matthew 11:28-30

The believer is never alone. You can be disenchanted by those around you, but God will never disappoint you. He is always by your side, speaking to your heart to love, protect, save you and guide you.

Our Church is a Welcoming Family. Read about how you can help your brothers and sisters in our Church feel like they are part of our family - Read more... 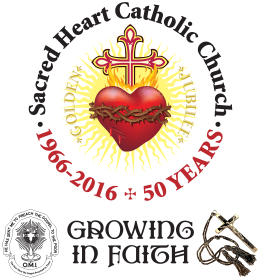